I’d like to introduce you to Betty, my sourdough starter. 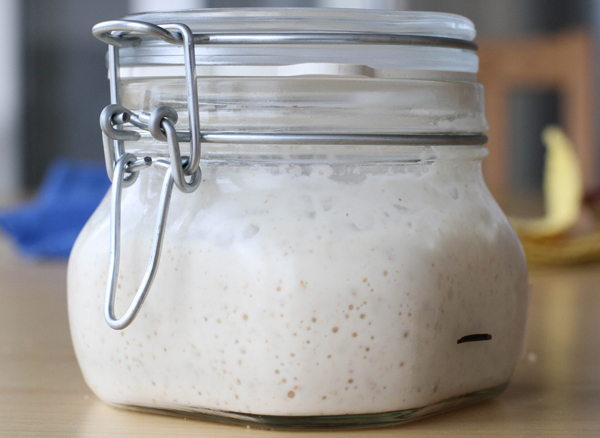 She was adopted, along with her twin brother Albert, who went to live with my friends Jenia and Bruno, from the wonderful Giulia of Juls’ Kitchen. While vacationing in Tuscany recently, Jenia and I had the pleasure of a morning cooking class with Giulia (post to come, as soon as Jenia gets back with the pics) and she was so generous as to share some of her own established starter with us. We actually forgot it when we left, but Giulia kept it well fed for us and we popped back in to collect it a few days later, just in time for the drive back to Geneva.

Giulia, I can’t thank you enough. Betty is a welcome and delightful addition to our family. Just look what she can do! 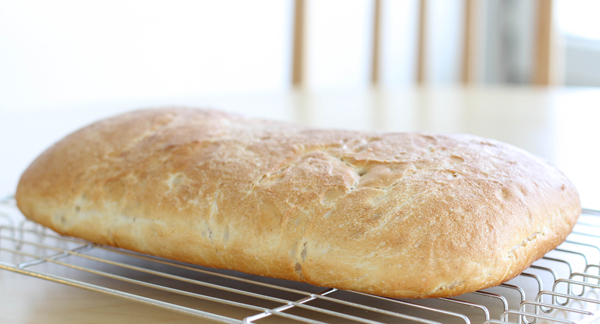 When I got home from vacation, I spent a solid week on The Fresh Loaf, reading advice on starter maintenance, scouring recipes, staring at pictures, choosing a new Dutch oven for baking, learning baker’s maths… my head was spinning with information but I was having trouble finding a super-basic recipe for my first tentative steps into sourdough baking. I wanted to start as simply as possible because I figured that would narrow the margins for error and make mistakes easier to correct in future. That’s when I stumbled on a post by Flo of makanaibio explaining her simple ratio formula of 1:2:3 (starter, water, flour). Even I could manage maths at that level!

I had originally planned on trying another (far more daunting) recipe and had already removed 65g of starter from the jar and fed it in preparation, and I hate throwing starter out so I decided that my “1” would have to be 195g. I added water and flour according to Flo’s formula, added 1 tbsp olive oil and 2 tsp sugar and kneaded the sticky mass for about 10 minutes. That evening, I stretched and folded the dough in the bowl every 30 minutes for 2 hours. At bed-time, I covered the bowl tightly, poked a couple of holes in the plastic and refrigerated it overnight.

In the morning, I removed the bowl from the fridge and let the dough come to room temperature for 2 hours. I kneaded in 2 tsp salt and spread it on a parchment-lined tray, covered it with lightly oiled plastic wrap and let it rise for 4 hours, during which time it doubled in volume. Then, I baked it for about 40 minutes at 230°C.

I had read numerous times that the bread has to cool completely before cutting it, so I spent an anxious few hours until dinner time waiting to see what it looked like inside and to taste it. The dough had been amazingly sticky and hard to work with but had risen well and kept its shape, it had sprung well in the oven, I had forgotten to oil the parchment but it hadn’t stuck at all, it had sung when removed from the oven…almost there.

And it was spectacular. Thin but super-crisp crust, the softest crumb I have ever felt and a beautiful flavour.

Undoubtedly, the most rewarding loaf of bread I’ve ever made. Can’t wait to try another one!

This entry was posted in bread. Bookmark the permalink.