Chocolate macaron layer cake filled with chocolate Swiss buttercream and topped with shaved chocolate. What else is there to say?

I adapted the cake recipe from here and filled it with a Chocolate Swiss buttercream adapted from here. You can use all dark chocolate in the buttercream if you prefer – I used a mixture for more universal appeal around our table. 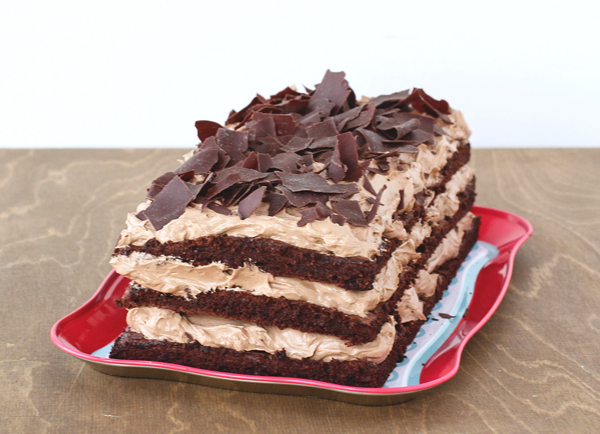 Mix the ground almonds and powdered sugar together then grind in a food processor until you have an extra fine texture. Sift into a bowl, re-grinding any bigger pieces of almond. Whisk in cocoa.

Using either a stand mixer fitted with a whisk attachment or a hand-held electric mixer, beat egg whites until frothy. Add caster sugar and salt and continue to beat until stiff peaks form.

Use a spatula, gently fold the egg whites into the almond mixture until fully combined, being careful not to knock all the air out of the whites – the final mixture should be like a mousse.

Pour the batter into the prepared pan, spreading it evenly.

Bake for 12 minutes, until cake springs back when pressed lightly in the centre. Remove from oven and cool completely in pan on a wire rack. Refrigerate cake for about an hour.

Melt the chocolate in a double boiler or in the microwave, stirring frequently. Set aside.

Combine the egg white, sugar, salt and vanilla in a heat-proof bowl set over a pan of simmering water or in the bowl of a double boiler. While stirring constantly (so you don’t end up with scrambled egg whites), heat the mixture until it reaches 70ºC (160ºF) and all the sugar has dissolved.

Using either a stand mixer fitted with a whisk attachment or a hand-held electric mixer, beat the egg white mixture until thick and glossy and stiff peaks form. Feel the bowl to check temperature – it must be cool to touch before adding butter.

When the meringue is cool, start adding the butter, bit by bit, beating to incorporate completely before adding more. If it looks like it is separating, just keep beating until it comes back together before adding the next piece.

Once all the butter has been completely beaten in, fold in the melted chocolate, then beat on medium until fully incorporated. If the buttercream is too soft, you can refrigerate it briefly before assembling cake.

Cut cake across into three equal pieces. Use a large serrated knife to neaten edges, as necessary.

Refrigerate the cake for a few hours, or overnight.

Remove from fridge and sprinkle with chocolate shavings about 30 minutes before serving.

This entry was posted in cake, dessert, french, macaron, sweet. Bookmark the permalink.