These certainly won’t win any beauty contests… but they taste spectacular! 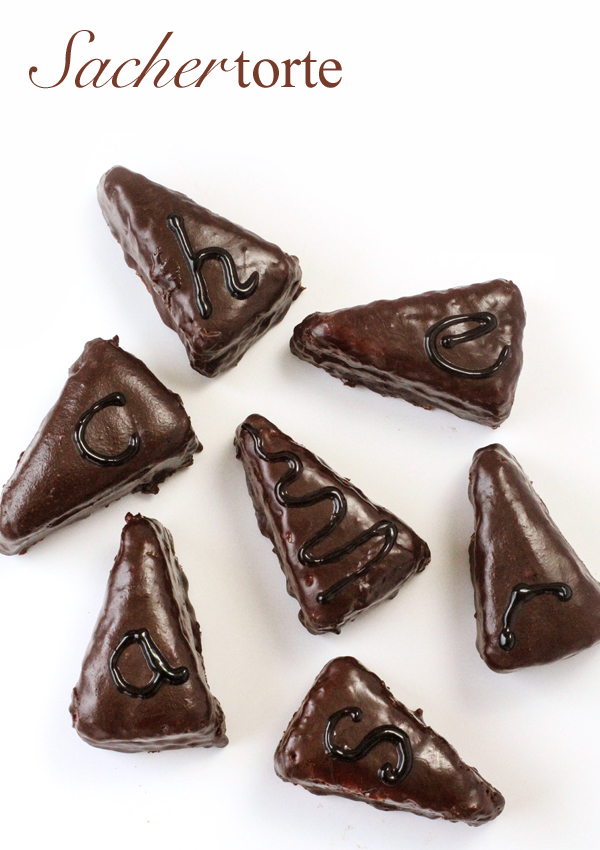 Preheat oven to 180 ̊C (360°F) with a rack in the centre of the oven. Arrange 14 silicon (or greased and floured metal) mini cake pans on a baking sheet.

Place the bittersweet chocolate in a double boiler or heat-proof bowl set over a small saucepan of barely simmering water (make sure that the bowl is not touching the water) and heat until just melted. Set aside to cool completely, stirring frequently.

Beat in the egg yolks, one at a time, scraping down the sides of the bowl as necessary.

Add the cooled chocolate and vanilla and beat until well-mixed and very light and creamy, scraping down the sides of the bowl.

Whisk together the flour and salt and sprinkle half of it over the chocolate mixture. Fold in with a spatula until almost incorporated. Sprinkle over the remaining flour and fold to combine completely.

Divide the batter evenly between the pans, so they are about 3/4 full.

Bake for 15 minutes, turn the baking sheet and bake a further 10 minutes or until a toothpick inserted in the middle comes out clean. The cakes will crack and dome in the middle as they bake but will flatten out as they cool.

Cool in the pans for 10 minutes, then invert onto a rack and remove the pans carefully, then turn the cakes right-side up on the rack and allow to cool completely.

Bring the jam and water to a boil in a small saucepan over medium heat.

Cook, stirring often, until the mixture thickens and drips slowly from the spoon, about 2-3
minutes.

Strain through a wire mesh sieve, pressing firmly on the solids. You should have about 1 cup of glaze. Use warm.

Cut the cakes horizontally into 2 even layers.

Generously spread the cut surface of the bottom layers with about 1/3 of the apricot glaze. Allow it to soak in.

Replace the top cake layers and spread the top and sides with the remaining apricot glaze. Work quickly before the glaze has a chance to set. Place the cakes on a rack set over a plate or baking sheet lined with waxed paper and allow the apricot glaze to set.

In a heavy-bottomed medium saucepan over medium-high heat, bring the sugar, water and chocolate to a boil, stirring occasionally. Attach a candy thermometer to the pan. Reduce the heat to medium and cook, stirring constantly, until the mixture reaches 112°C (234°F), about 5 minutes.

Remove from the heat and stir to cool and thicken slightly, about 1 minute. Use immediately.

Spoon it over the top of the cakes one at a time, using a silicon spatula to spread it around the sides as well. You need to work quickly or the glaze will thicken as it cools and become difficult to work with.

Heat the chocolate until just melted, then stir in enough vegetable oil to get a pipeable consistency (I used too much – be sparing and add it slowly!). If necessary, let the chocolate mixture cool slightly to thicken so that it is not too runny.

Place the chocolate in a disposable piping bag or small Ziplock bag and snip off the tip to make a small hole. I recommend a practice run on waxed paper before writing on the cake.

With the writing chocolate, pipe the word “Sacher” either on each cake or between 6 of them, and add any decorative flourishes you wish. Chill the cakes until the glaze is completely set, at least 1 hour.

Let the cakes come to room temperature for about 1 hour before serving.

This entry was posted in cake, dessert, snack, sweet. Bookmark the permalink.