Spring is here in the northern hemisphere, and that means it’s time to break out the salads! Not just any salads, but a whole meal, loaded with texture, flavour, protein, calcium, fibre, vitamins and minerals. 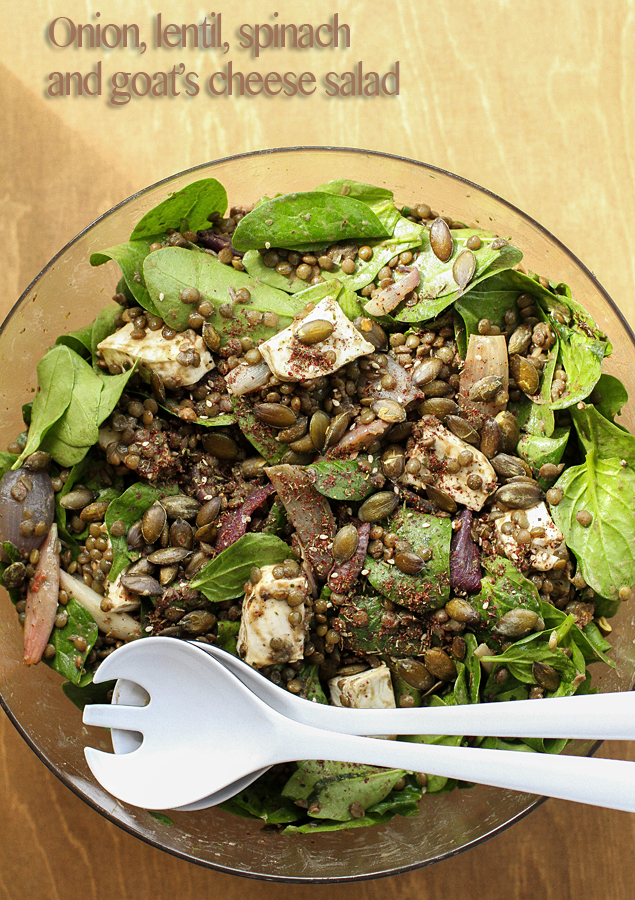 This salad was inspired by Yotam Ottolenghi’s onion, chickpea and goat’s cheese salad. My brother and I made it more or less to the original as part of a Middle Eastern feast, but I switched the chickpeas for lentils in this incarnation, as they are gentler on my stomach.

Put the onion quarters and shallot halves in a roasting pan with two tablespoons of olive oil, a good pinch of salt and a couple of grinds of black pepper and toss together gently. Place in centre of oven and roast for 20 minutes, until soft and starting to brown. Stir through oregano, breaking the onions and shallots apart a bit, and roast for another 10 minutes. Remove from oven and set aside at room temperature.

Meanwhile, pick over the lentils and remove any foreign objects, then simmer in vegetable stock for 20 – 25 minutes. Check for doneness, and when they are of the desired consistency, drain and set aside. There won’t be much liquid remaining when you drain the lentils, but you can reserve it and freeze it for later use – it’s a great addition to a soup base.

Put a small skillet on a high heat with two tablespoons of oil and the garlic. Once the garlic starts to sizzle, add two teaspoons of za’atar, the cumin, a pinch of salt and a good grind of black pepper. Cook for about 2 minutes, stirring continuously. Remove from the heat and set aside.

Put the onions, shallots, lentils and spinach in a large bowl. Add the garlic and its oil, two teaspoons of za’atar, the remaining two tablespoons of oil and the vinegar. Toss to combine, then stir in the goat’s cheese. Season to taste

Toast the pumpkin seeds in a small skillet over medium-low heat until fragrant.

Sprinkle over the pumpkin seeds and remaining two teaspoons of za’atar, and serve.

This entry was posted in salad. Bookmark the permalink.